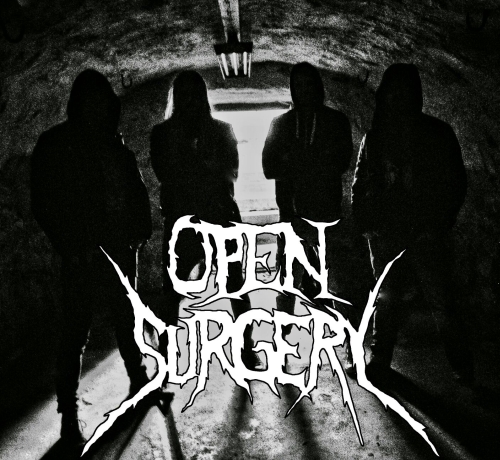 Getting off the luxury liner of Silja Line in Stockholm realizing the Close-up metal cruise is over is not such a drama as we have a great cure for the so called PCD (Post Cruise Depression) – we are going downtown to another metal show. Daro-the metalhead is bringing us to a free gig at “Coppan” as he would name the place. „Copperfields“ is two floor nice bar, giving stage for metal bands at the first one, every weekend.

Open Surgery, on which we will focus on here, get us immediately by the throat with their old school death metal. And so that’s it-we are hooked, we are now OS fans.
If you haven’t got the chance yet, check this awesome band from Sweden make sure to check their two albums "Experiments Of Excessive Torture" (2014) and „Post Mortem Mutilation“ (2016).

Check also their Youtube channel www.youtube.com/opensurgery666 and keep up with the band’s news at their official Facebook profile: https://www.facebook.com/opensurgery
Now, ladies& gents, please meet Mr. Daniel Persson – vocals and guitars in OS and as it turns out a (not so old) nice guy with a great sense of humor, the band’s spokesman and apparently the only one in OS who knows how to handle hangover. Amen!

The band is (almost) ready with their new EP and Daniel has something to say about it.

Here is the Q&A for your reading pleasure:

Open Surgery is an old school death metal band from Sweden. Is this short line enough to present the band? Would you like to add anything?

-An excellent choice of words, although our biggest inspiration are the -90s bay area death bands.

It was a “love of a first sight” once we get to see Open Surgery live in Stockholm this past March. How often it happens to see an underground death metal band performing live at the first floor of a kind of fancy bar in the center of a capital city...

-The venue at Copperfields is perhaps a bit different but it works out really great! Thanks to Fredrik who is running the "Death Kills" club! The key is continuity, they have bands there every weekend!

Unfortunately then at the show you had not even a single item for sale. I heard you also had no merch at all at the festival you played at in April. Why was that so?

-We had T-shirts and promo CD's which we sold at the entrance to the venue, how drunk were you guys? ;-) Our plans are to release our upcoming EP on vinyl and perhaps a new T-shirt print for the release as well.

You were more than generous to offer to get me and a friend T-shirts (plus promotional CD) for free. We then made a deal to have the T-shirts in exchange of some booze for you guys. It looks like it could be good business in country where the alcohol is so expensive and can only be bought at these Systembolaget stores...Crazy!

-Systembolaget has its pro's and con's but we are used to it. I guess the only way to deal with Systembolaget is to plan ahead, or get drunk every day...

This reminds me of the old good times and the tape trading, fanzines and barters of the type– get 3 demos in exchanged for a bottle of vodka. And the snail mail correspondence of that type “return the postal stamps!”. Have you been part of this process back in the days? Is there anything you miss of these days or you are that type of person that appreciates the extras of the modern day better?

-We are a tad too young to have experienced the good old days. But we have older siblings who took part in some of it. The old days are still at work, the music industry is slowly (SLOWLY) changing to the better. Reaching out with your music is easier these days but at the same time there are millions of bands nowadays. As an upcoming band without any credibility from old merits, it is hard to make a name for ourselves. But we do this for fun, not for fame. We just want to play death metal, get drunk and have a good time!

Talking about the past, I see OS use to have different logo – kind of childish... but cool one. But what is this pentagram doing there in the “O”?
How does the logo change reflects the progress of the band?

-Both our logos were created by Terje (guitar) and of course you need a pentagram and inverted cross in a cool death metal logo? He-he. We realized that taking things to the next level would require a more professional logo and hence we have the new one. 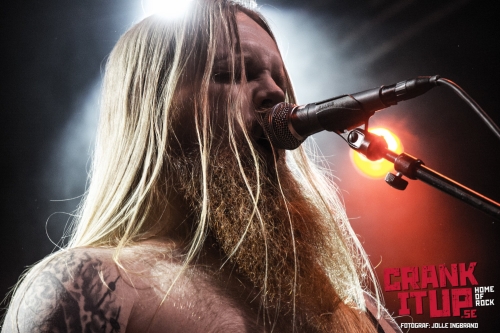 So you are ready with a new record. We got to hear some teaser already by the upcoming EP "After Birth Abortion". Please give us some details on the release.

-The EP will contain 4 songs, true to our previous releases, our fans will recognize the sound... Three songs are done: "After Birth Abortion", "Hammer Justice" and "Reduced to Broth". 4th title is not yet set. I think we really have created some masterful riffs for this release, which at least for me is what we are all about. Lyrical-wise John (drummer) has put together some killer stuff as well. Starting from our last release we are only working with real events lyrically. So actual murders and horrific events are what we try to describe in our texts.

Talking in general, is the secret of the Swedish Death Metal being so awesome indeed in using BOSS HM2 Heavy Metal guitar pedals?

-It probably has had more impact then what people realize... We do not use them though. I use a Mesa amp with a Mesa boost pedal for the extra touch. I did however use a JCM900 amp for the recording of Post Mortem Mutilation. We wanted an old school feel to the sound. Terje in turn used a JCM800. We tried so many pedals I cannot remember what we ended up with. But not an HM-2, it is a bit too messy for our riffs and sound.

Following the latest news that the first day of Rock Am Ring had to be cancelled as the police reported they were told someone is planning terror attack there... How this will change the metal festivals atmosphere and will this at all affect the party metalheads have while at a fest?

-So far we have no attacks on metal festivals in Sweden. Sweden Rock is ongoing now and from what I have read there are safety precautions in place to create a safe environment for the visitors. I do not think that the spirit among the metalheads will be any different. Good music and booze always gives a good mood! I hope that every festival makes sure that no fucking terrorists will destroy the good fun.

Actually there was terror attack in Stockholm right at the dates of the festival “Dark Days of Stockholm” happening not far from the city center. As far as I know, still metalheads attended the first day of the festival and were asking if the second day of the event will be happening as they would like to go.

-We played with IXXI (really nice guys!) at Motala Thrashfest and they played the second day since the first day was cancelled. A lot of people turned out to show their support against terrorist fucks.

Are you guys going to play any festivals this summer?

-No we are not scheduled for any festivals this summer but we have some dialogues ongoing for gigs this autumn.

By the way, Sweden has traditions and strong metal scene. So could you please give the beginners your main 3 tips on how to be brutal death metal vocalist? I guess (vocal) “coach” is a dirty word here? 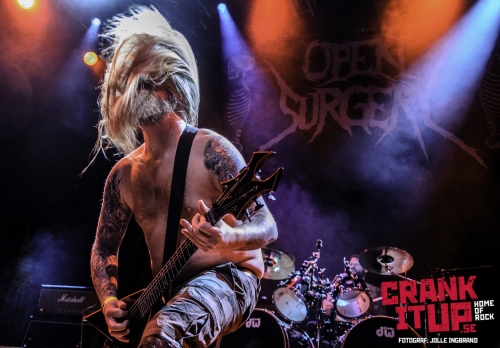 And a harder one: how to solve hangover? (ha-ha)

-Ha-ha more booze? Trick is to never get sober? He-he.

Is any of you playing with another band as well beside OS? Although you may not live in Stockholm, it’s a metal city so when you are hanging around I guess it’s easy to end up in a bar with someone who plays in a band... So it looks like some are starting new projects every time they get drunk together – let’s take for example (the mighty!) Firespawn, where we see members of Necrophobic, Unleashed, Grave, Entombed... If you don’t have any side project then you may be are not drinking enough!

-Actually there are some side projects, I have teamed up with the remnants of Intestinal in a new band to be called Cremated. An EP is being recorded there as well. Terje and Erik have a Doom project ongoing. Since we are getting old there is a limited amount of time to put on music, which is why we are mainly sticking to Open Surgery. Once you find a recipe which is working you stay with it.
Our hometown Finspång has a long history of metal, Edge of Sanity is from here for example. Drette from Edge is now in The Lurking Fear. Also Facebreaker are good friends of ours.

Last but not least, 1 to 10 what are the chances OS to play live in Bulgaria?

-Right now it is on the lower half of the scale. But doing smaller tours in Europe is one of our goals, so hook us up for some gigs and we will come.

-Eternal thanks for your support! Skål!