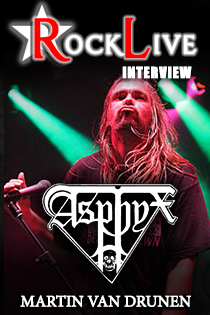 Hello Martin it’s nice to hear you. Where are you at the moment?

Asphyx are coming to Sofia for the first time for a headline show what are your expectations?

It will be quite crazy I think. The one time we played in Bulgaria, was on Loud Festival (live report / pictures) few years ago and we had some bad luck because it was really hot and we were exhausted after few songs. Afterwards when we went in the crowd and gave autographs and pictures, it was a madhouse. So I kind of expect the same.

What the fans should expect. I know that there are some crazy heads from Bulgaria following you on festivals near.

Well it will be a headline show in a smaller venue. This is where we usually are the best. We won’t have to think of the time, and we will play a set that we want. Usually on festivals you get around 50 minutes playing but for 50 minutes we just warm-up.

There are already rumors that you have some new songs for a future record, can you tell us more about that?

Is there any chance to hear something new on the gig in Sofia or it is too early for that?

Not that it’s too early but I don’t think it will be appropriate. It’s our first time doing headline show in Sofia and people will want to hear old songs and songs from latest albums and not some tracks that they are not familiar with.

Deathhammer was released in 4 years ago and Death the brutal way 3 -4 years before that . Why do you have so big gap between the records?

Well I guess it is because we were busy with all kinds of other bands. Paul is still involved in “Thanatos” and I was playing with “Blood Court” and it takes some time. The other problem now is the distance we have between us. We are not like other bands who can easily meet and do a proper rehearsal or send each other shitty recorded riffs via Skype. We all need to be in one room and make a lot of noise in order to make things happen

As we already said that you are quite active and you have been in iconic bands. Where do you find your inspiration for lyrics and music?

Well first of all I’m still a metalhead to the core. I was when I was a kid and I still am. People told me “Just wait until you are older and have family” Well I’m almost 50 now and I still go crazy with metal. Some things never change!

Ha-ha-ha exactly. This is something that I do with passion and the inspiration for the lyrics comes because I read books a lot and that is the man inspiration source that I have. And as I explained it to your colleague from Bulgaria previously. It is not the topic of the book that I am inspired of, but you read something in the book that triggers your imagination. And of course everything that happens around you is the resource that helps.

It is true that you are icon in the death metal genre but I’m sure that you also were inspired by someone or some band. Can you name few?

When I was 8 years old the first band that I loved was KISS ... before they went in to disco. By that time I really loved what they were doing. They were loud and it was simple rock and roll and the show they had was blowing you away. It was Hard Rock – Heavy metal, and after that you find bands like Van Halen and Black Sabbath. After that all the British stuff came in like Judas Priest, Saxon, Iron Maiden and then you find Motorhead which were really loud. Later Venom came in and that was my main influence. I think that for most of the death metal bands, they were the ones that set the fundament.

What about the death metal scene now? Are there any youngsters that you think they are doing alright?

Asphyx has always remained an underground band, but your fan base has remained loyal and strong. What has kept Asphyx relevant these many years?

I guess this was because the fans know that they will never be disappointed. They always know what they can expect from us. For example we will never use electronic drums.. or do disco (ha-ha). For example if you are a Motorhead fan there is no album that will disappoint you. You know what you are going to get. It is basically the same with us. If the whole band likes what we are doing then the fans will like it. if I am not fully satisfied with something I will say “forget it” we are not putting it in the album.

And one more thing - We are always accessible for the fans. They can always come and take pictures with us and we will sign everything and chat with them. We are not going to hide in the backstage. We are looking forward to meet the fans and have a drink with them. After all they are the ones that buy our records. They are the reason why we exist and we are aware of that. If you don’t respect your own fans, it is better to stop doing what you do.

You have really typical and unique voice. There is urban legend here that you keep it this way with drinks and cigarettes.

Ha-ha-ha that is not nice! It is not like I am “training” my voice. I had my days of really a lot of drinking and it was not to keep my voice in shape, because I like a beer here and there. And I guess it is whit most of the metal heads. I don’t give up few beers and cigarettes and my voice is still in shape. It is not like it is not damaging it but... To train my voice I have something that jet pilots use to breathe oxygen. And it is not because of my voice it is because of my neighbors if I scream without it. As I said we don’t constantly meet each other in rehearsal rooms so I have keep up doing that to warm up. This is the discipline but I like to drink beer and smoke cigarettes too.

Can you leave some message to all the fans that will read this interview and will come to see the band?

I hope all that you read this will come and have a good time with us. We will do our best at the show and later don’t miss the opportunity to have a drink with us. Take your records with you, or all the stuff we can sign. Come over and have a good time and see what death metal is all about.

Thank you Martin for this interview and for your time. I guess I will see you in Sofia and we will have a beer.

Yes man sure, no problem. See you on the bar!