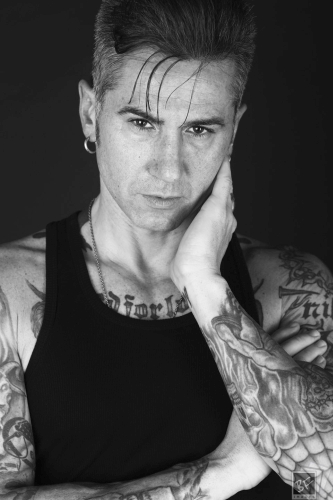 Hello Simone! How are you, what song/band are you listening to right now?

What’s your favorite part of being an artist?

-Travelling around, visiting many cool places and meeting new people.

You are a performer - great entertainer, but are you such in real life? Are you the heart of the party etc. or are you more of an introvert kind of person?

-Well, when it‘s time to party I love to party hard. I can’t describe myself as an introvert person, even though I love to spend time just by myself or go on a holiday totally alone. Balance ‘em is the secret .

In the videos you have with Spiritual Front you are playing roles very well. Do you ever regret for not checking your luck as an actor, meaning to go study in a theater academy or so? It’s obvious you got talent there. You are also a big cinema maniac so would make sense, right?

-Yes, indeed, I attended couple of drama schools for a while, but I was sick of most of the people involved: untalented upper class wanker, fake artists, fat greedy producers. All this shit decrease the level and the spirit of those who really love theatre and art. I wasn’t one of those who were patient enough and after a while I gave up. But acting for video clips or other pieces that aren’t connected with academic world is pretty ok.

The lyrics you write for SF are very provocative, same for the SF videos. What you look to provoke?

-I wouldn’t say “provocative”, I would say I describe “reality”. Real life is full of good and evil, sex and chastity, desires and sacrifices.

Do you sometimes get your music and lyrics misunderstood? Please give us a story if so. (for example: I imagine the organizers of the Pride Parade may have asked you to talk about the same gender relationships etc.)

You have such a great collaboration with the guys of Ordo Rosarius Equilibrio- it’s easy to see that there is a strong friendship, understanding and so on. If you form a band with Tomas Pettersson and Rose-Marie Larsen how you would call it and why?

-Simply The Front of Roses and Cocks as those are topics which we are constantly approaching.

You started as a solo artist and then build up a full line-up band. What are the positives and what are the negative sides of being solo artist?

You have already played live in Sofia solo in 2011. Sorry for the cliché, but I have to ask you: what are your memories from that first visit of yours here in Bulgaria?

-I played at the tattoo convention, it has been a very interesting and pretty weird event, but very funny! I loved Sofia - a very crossover city, many naïve street and corners... I also remember you have very delicious food there.

Now you are coming for a concert with Spiritual Front. Please present the members of the band.

-This time we’ll perform as trio: Me, on vocals and acoustic guitar, Francesco Conte - electric guitar and Andrea Freda – drums.

What songs you have at the set list for the show in Sofia on 19th May?

-Our “classics” plus some new tracks taken from the upcoming album “Amour Braque”.

Will you bring merchandise at the show here and what items you will offer for sale?

-Unfortunately we will have only T-shirts and few extra concert CDs (available only at the concerts).

Could you please give us your 3 main tips on “How to get chick backstage.”?

-Just make them believe that you are a famous star and that you can fuck all night long... which is a miserable lie!

A rockstar once said: “You have to be a politician or an assassin or something, to really be a superstar, dude.” This guy eventually became a legend later on without being none of above mentioned... Anyway, would you agree with such words?

-Well,... both – politicians an assassins do stupid things....ha-ha-ha.

-If I’m not mistaken, you are extreme metal fan so I wonder if you had a dream to play in a thrash metal band in your childhood?

-I still dream about it!

Could it be then that you play also in a “hooded” metal band of that type Batushka and Undead? Who knows, you might play under cover and express your metal self, ha-ha.

-Not yet, but I’m seriously thinking about doing something like that!!!!!!!

Cheers and see you!